“And [Jesus] spake a parable unto them, Can the blind lead the blind? shall they not both fall into the ditch? The disciple is not above his [teacher]: but every one that is perfect shall be as his [teacher].”

How careful should parents and pastors be in selecting teachers and leaders for their children?  Would you consider going to the campus of a state university and randomly recruiting the first people you encounter as your children’s teachers?  Would it matter is they were Christian believers with moral character and a strong faith?  Would it matter what they believe about the authority of Scripture, basic biblical doctrines such as creation, sin, and redemption, or issues such as abortion, marriage, and sexual orientation?  Bear in mind the warning Jesus gave in Luke 6:39-40.  Since our children will be like their teachers, we must take great care in choosing those who teach them.  But do we?

We are very familiar with the influence on children’s beliefs by “teachers” such as television, video games, and sport and movie celebrities, but there is another influential group who teach our children every day—their textbooks.  Nine out of ten American K-12th grade children attend a public school in which the textbooks, by law, must be free of any teaching about God.  When compared with the teachings of Scripture, these textbook lessons run the spectrum from neutral at best to totally antithetical at worst. . . .  Not surprisingly, many youths, exposed to unbiblical teachings in high school and college, leave the church and their faith behind, some permanently and others for a season. . . .

So how much poison does it take to render the water in a good well unfit to drink?  In my personal experience, it does not take much.  The truth of Jesus’ caveat that our children will look like their teachers is regrettably obvious in the growing number of youths leaving their church and faith and the growing antipathy of our culture for truth about God, Scripture, the church, sexuality and gender, marriage, the sanctity of life, and many other issues.

To read the full article by Edward Gamble excerpted above, please click this direct link or contact Mr. Fry for a complimentary copy of The Renewanation Review magazine it is taken from.

Next Thursday, May 16, our elementary students and secondary ensemble will present a special spring concert with many patriotic songs, sacred music, Bible quotations, poetry recitations, and even some instrumental music.

The students have been working on the music for this concert for several months.  Students in Grades 1-6 and secondary ensemble members should be at school by 6:30.

The concert will begin promptly at 7:00 PM in our church sanctuary.  We encourage all of our school families to be here with us.  We know you will enjoy the program!

One of our favorite days of the school year is almost here!  Friday, May 24, weather permitting, LCA will hold our annual field day.  This day is for all students, K3 through twelfth grade.  Students will have outdoor activities, fun, and snacks!

Our high school prayer groups will be running the activities for the younger students in the morning.  All of our students should have the opportunity to enjoy the two bounce houses we are bringing in as well!

Of course, if bad weather is in the immediate forecast, we will postpone the event until the following week (likely Friday, May 31).  Keep an eye on your email for more information on this fun day!

At the end of each school year, we ask our families to complete an anonymous survey to help in our school improvement process.  Each family should have received a survey invitation link by email.  Please consider investing the time in this survey to help us continue to carry out our mission of training young people for God’s service.  Please see Mr. Fry with any questions about the survey.

Parents of children in K3, K4, and K5 should note that Thursday, June 6, is the final day of school for those students.

Mrs. Mansfield’s K3 class is working on their end-of-year program each day.  We ask all of our K3 parents to join us on Tuesday morning, June 4, at 10:00 AM for a memorable program celebrating how much our youngest students have learned here at LCA over the past year.

Our four and five-year-old students have already been working diligently on their closing program.  All K4 and K5 parents should plan to join us at 7:00 PM on Thursday evening, June 6, for this program and for a special gradution program for Mrs. Kupeyan’s kindergartners.

Please contact your child’s teacher with any questions as you make plans to be here on Thursday, June 6.

As many of our parents are aware, Pastor Walter has been running a carpetball tournament during lunch time over the past several weeks for those in grades three through twelve.  The tournament recently completed and we are excited to announce the winners!

Latham Christian Academy is privileged to have nine graduating seniors during the 2018 – 2019 school year.  Several members of the Class of 2019 have attended LCA for a long time, and they have all become good friends during their time here.  We will be highlighting one of the seniors each month in an article published in our Knightline newsletter.  We continue this week with senior Zarash Tahir. 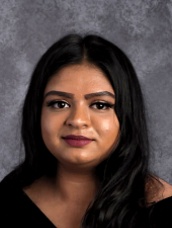 Zarash has attended LCA since eighth grade after transferring here from Rensselaer Junior/Senior High School.  Zarash has two sisters: Zarka, 19, who is a student at Siena College and Zaara who is in seventh grade here at LCA.

Like several other members of the Class of 2019, Zarash’s family came from overseas.  Her father was born in Pakistan and moved to the United States in 1999 after marrying Zarash’s mother.  He attended Hudson Valley Community College and is a banker today.

Zarash’s mother was also born in Pakistan.  Her parents moved to the US for the greater opportunities here when Zarash’s mother was only 2 years old. Zarash’s mother returned to Pakistan to get married.  Once coming back to this country, Zarash’s mother worked as a finance manager for 23 years for the Catholic Diocese finance office before starting her present job as a supervising accountant last year, working for the New York State Homes and Community Renewal agency.

Zarash’s family lived in Rensselaer for many years before moving to Loudonville in 2016.  The family attends the Community Gospel Church in Rensselaer where they are involved in many ways.  Zarash works regularly with the kids’ church and has attended mission trips with her older sister and has also ministered on homeless outreaches with her family.

Zarash accepted Christ as her personal Savior when she was 11 years old and was baptized about a year later.

Zarash will remember many of her classmates after graduation, especially fellow senior James Earnest.  Zarash reports that James makes her laugh and that there are “a lot of things to remember about him”!

LCA alumnae Victoria Hauprich (‘17) and Zarash would sometimes get into disagreements at lunch with Victoria’s classmate Seless Terry (‘17).  Eventually Seless would leave the table upset but would always come back to the table the next day—“I guess that was our friendship,” according to Zarash.

Zarash’s classmate Samuel Earnest will also have a memorable moment for Zarash (as well as her other classmates) from a time they were taking senior pictures together.  Mrs. Mansfield had asked the seniors to get into the back of James Roarke’s truck and for the guys to stand behind the girls who would be seated on the tailgate.  All of a sudden they all heard a tearing sound and Samuel simply said, “I think my pants ripped!”

Zarash and Mrs. Kettlewood also enjoy a special relationship where they always “catch up” with each other at the office window!

Zarash enjoys listening to music and watching movies in her spare time, but she also enjoys eating—especially anything chicken!  She enjoys the Pakistani food her mother makes and her particular favorite is her mother’s chicken biryani.

Zarash has visited Pakistan several times, most recently about four years ago when she had a great experience seeing extended family and experiencing the culture her family moved from many years ago.  Zarash would enjoy traveling to Pakistan again.

Zarash plans to attend Sage College to study biology with the eventual goal of a pre-med major and going on to become a doctor.  Zarash’s life verse comes from Philippians 4:13, “I can do all things through Christ which strengtheneth me.”