“Let us labour therefore to enter into that rest, lest any man fall after the same example of unbelief.”

We all live busy lives and tend to treasure times of rest, whether this means relaxing “down time” or times of physical sleep.  Both can be refreshing and even exhilarating.  This chapter in Hebrews, however, is speaking of another type of rest that should characterize the lives of Christians.

We are called to be at peace, not constantly struggling against the daily pressures of life.  Just four verses after the one cited above, the Bible speaks of bringing our “infirmities” to the Lord in prayer.  When we are struggling financially or battling a physical illness, God desires for us to enjoy His peace.  When another person has said or done something that caused us pain, we can still be at peace with God.

Others should be able to look at us not as unconcerned, emotionless people, but as those who are able to rest confidently, knowing that God is in control.  It is our prayer that we at LCA demonstrate this attitude in our relationship with our students and parents.

If your family is planning to use public school busing services to LCA in the coming school year for children entering kindergarten (K5) through 12th grades, you must notify your district’s transportation office no later than April 1.  This is a hard deadline and requests made after this date will likely not be honored by your district.

We have some districts’ request forms available in our school office.  Please see Mrs. Kettlewood with any questions.

On Thursday evening, March 14, LCA will be hosting a special open house.  Current and prospective families are encouraged to drop in anytime between 7:00 and 8:15 that evening.  Students will be able to tour the building and collect stamps for their “passports” and learn about the many nations and cultures of the world as they meet all of our teachers and see our entire program here at LCA.

LCA elementary and secondary students are also preparing history fair presentations which will be on display in our gym, adding to the learning of the evening.

Please invite family and friends to attend with you.  We have a special gift for all of the children who attend and complete their “passports” as well.  We are looking forward to a great evening together!

Not long ago, we sent home a packet of information on re-enrolling for the 2019-20 school year.  All families wishing to send their children back to LCA in Fall 2019 must complete the re-enrollment process.  If you need a copy of any of the paperwork, you can get that at our office or on our website or on Sycamore.

We hope you have found the program of LCA to be an encouragement as we partner with our parents to see God’s best in the lives of each student here.  It is our prayer that God will lead you to return this fall and continue to be a part of the ministry here.  Our curriculum is designed with a scope and sequence in which each year builds on the one before it, and we are confident your child will continue to grow through each passing school year.

If you have any questions about the re-enrollment process, please contact Mrs. Kettlewood in our school office.

As the school year goes on, all of the children are growing!  Please remember that the jumpers and skirts for all girls need to come to the bottom of the knees.  This includes our kindergarten students.  Because they’re getting taller, some of our girls may need to make another visit to our uniform supplier.  We appreciate the support of all of our parents with our school dress code.

Latham Christian Academy is privileged to have nine graduating seniors during the 2018 – 2019 school year.  Several members of the Class of 2019 have attended LCA for a long time, and they have all become good friends during their time here.  We will be highlighting one of the seniors each month in an article published in our Knightline newsletter.  We continue this week with senior Jessie Chen. 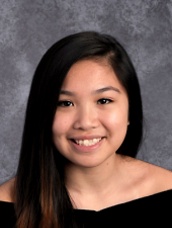 Jessie Chen has attended Latham Christian Academy since Mrs. Urban’s K4 class in 2005.  As mentioned in an earlier Senior Spotlight, Jessie and classmate James Earnest have the longest tenure of any current LCA student.

Jessie’s mother was born in China where she also went to college.  To try for greater opportunities, she moved to New York City where she met Jessie’s father and earned her living making jewelry.  (Shortly before the 9-11 attacks, Jessie’s mom was working at the Marriott below the Twin Towers.)  In 2001, the couple decided to move to Colonie where Jessie’s father opened a sushi restaurant.

Jessie’s sister Chelsea, a current 8th grade student at LCA, was born in 2005.  Today, Jessie’s father lives in New York City where he is recovering from a stroke, and Jessie’s mother is a custodian at the University at Albany and lives in Watervliet.

Upon moving to the area, Jessie’s family first attended Loudonville Community Church before starting to worship with a Chinese church in Albany.  Eventually Jessie and her family settled at Latham Bible Baptist Church where they continue to worship and serve.  Jessie accepted Christ as her Savior in Mrs. Urban’s class at LCA in May 2006.  Before the start of fifth grade, Jessie followed Christ in believer’s baptism at LBBC under the leadership of Pastor Walter.  Jessie has been actively involved in her youth group, has helped in the church nursery, and has volunteered in the annual vacation Bible school.

Jessie will remember several special friends from her time at LCA.  Taylor Hanson, who attended LCA through 6th grade, and Jessie have been best friends since kindergarten.  Taylor and Jessie still continue to remain close, although Jessie remembers keeping each other busy writing their own tests and quizzes when they were in class together.

Jessie also will fondly remember classmate James Roarke—“Mayo”—you’ll have to ask them!  Jessie reports that James is always asking her to do his yearbook pages!

LCA alumnae Mickayla Mein (Class of 2016) is another special friend to Jessie.  She remembers that they used to take naps at school and stay with Kallie and eat her mother’s snacks!

Junior TJ Ryan first became friends with Jessie while throwing rocks at Pastor’s camp and almost hitting Mrs. Walter (whoops!).  Jessie will remember that they laugh a lot together, eat a lot together, and talk about future work out plans together that never seem to happen!

Jessie will also remember her longtime volleyball coach, Mrs. Kupeyan.  They would talk a lot about volleyball and a lot of “random things”!

Jessie has one funny memory when she was in a classroom with Mickalya, Chelsea, and Kallie.  Mr. Fry came in and asked, “Who is supervising you?”  Without missing a beat and in typical Christian school student fashion, Kallie replied (in the most innocent voice), “Jesus!”

Jessie does hope to return to China some day.  She would love to bring someone along and show them the food she remembers.  She would also appreciate the opportunity to see the family she has not seen since she was very young.

This fall, Jessie plans to attend Sage College and study nursing.  She hopes to go into neo-natal nursing or pediatric nursing and would like to remain in this area in the future.

Deuteronomy 31:6 is an encouraging Scripture verse to Jessie, “Be strong and of a good courage, fear not, nor be afraid of them: for the LORD thy God, he it is that doth go with thee; he will not fail thee, nor forsake thee.”