“Wherefore receive ye one another, as Christ also received us to the glory of God.”

Self-image is a popular buzzword today.  Parents and educators are concerned about how a child views himself.  We may question whether a Christian views this concept differently from those who do not know Christ.

While we commonly hear that we should accept ourselves as we are, this concept is different from the Bible’s teachings that we as Christians are accepted because of Christ’s shed blood.  That salvation gives us the acceptance we will find nowhere else.

John 1:12 teaches, “As many as received [Jesus Christ], to them gave he power to become the sons of God, even to them that believe on his name.”  Those of us who claim the Name of Jesus Christ are the sons and daughters of God and are co-heirs with Him to the infinite fortune God promises as an inheritance.

In John 15:15 Jesus calls His followers His friends.  It is a truly awesome thought that we are the friend of the One who spoke the universe into existence with only His voice.  He is not some impersonal, distant ruler, but rather the “friend that sticketh closer than a brother” of Proverbs 18:24.

Romans 8:1 teaches us that “there is therefore now no condemnation to them which are in Christ Jesus, who walk not after the flesh, but after the Spirit.”  While we may worry about getting in some trouble at work or with our families, it is liberating to know that God, as the great Judge, will never condemn us.  He has already given the victory, and we must only lay claim to it.

When we discuss our self-esteem, it is easy to find ways we can make ourselves feel better, and all of us enjoy receiving complements.  All of those words are really empty, and we know that deep down.  We are depraved and fallen.

Rejoice today in the salvation in Jesus Christ.  Because of His death, burial, and resurrection, we can enjoy a self-image covered in His righteousness so that our natural nature is replaced by Jesus’ own nature.  The moment we were born again, we were given the best self-image ever, a picture of Jesus Christ Himself!

LCA will be closed February 18-22, for our annual Winter Break.  Our school office will be closed during this week as well.  We encourage our families to schedule all trips during regular school breaks to minimize the academic disruption of missed school days.

The Senior Class will once again be selling “Candy-grams” to all who want to express their love and appreciation for someone special in their lives.  They will be delivering your message and “Five Chocolate Kisses” to those special people for you on Thursday, February 14, 2019.  If you prefer, you can also purchase a beautiful, long-stemmed rose to surprise a special friend—or your child can order one for his teacher!

The school office will be sending home order forms.

It’s the time of year to celebrate LCA school spirit in a special way in our annual Spirit Week.  Each year, our senior class puts together some special days for our student body.

Each student should have received a handout detailing the special days.  The school also sent out an email with links to those handouts.  If you need another copy, download it from the links below.  Let’s have a great week of fun dress and unique activities!

As the school year goes on, all of the children are growing!  Please remember that the jumpers and skirts for all girls need to come to the bottom of the knees.  This includes our kindergarten students.  Because they’re getting taller, some of our girls may need to make another visit to our uniform supplier.  We appreciate the support of all of our parents with our school dress code. 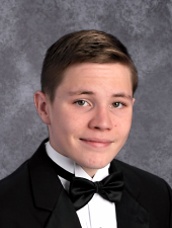 Latham Christian Academy is privileged to have nine graduating seniors during the 2018 – 2019 school year.  Several members of the Class of 2019 have attended LCA for a long time, and they have all become good friends during their time here.  We will be highlighting one of the seniors each month in an article published in our Knightline newsletter.  We continue this week with senior Joel Collins.

Joel Collins is the newest senior at LCA, joining his class just last fall.  Before coming to LCA, Joel had attended Oakwood Christian School since kindergarten in 2006.

Joel’s father was born in Rahway, New Jersey, the son of a pastor.  After moving to Maine, the family eventually settled in Brunswick, New York, when Joel’s grandfather accepted the pastorate at Brunswick Baptist Church, where he continues to serve.  Joel’s father attended Latham Christian Academy, graduating in 1995.  He then went on to Tennessee Temple University where he studied missions.  Joel’s father has worked in IT for the NYS Department of Health and now for New York State.

Joel’s mother was born in San Angelo, Texas.  The Lord led her to attend Tennessee Temple University, where she met her future husband.  After they married in 2000, they remained in Tennessee.  Eventually the family moved to Lansingburgh in 2006.  They have lived in the area ever since.

Joel was born in late 2000 in Tennessee while his father was still attending college there.  Joel’s younger brother Michael joined the family in 2004, also being born in Tennessee.  Once the family moved to the area, Joel began attending Oakwood Christian.

Joel’s family has attended his grandfather’s church, Brunswick Baptist, since moving to the area.  Joel accepted Christ as his Savior in 2007 while attending this church and was baptized there later that year.  Joel is involved wherever he can serve, helping in custodial work and serving in the audio-visual system.  Joel has gone on several missions trips with his church, including two to Saranac Lake and one to Lee, MA, where they helped build new buildings for small churches in those areas.

When Joel thinks back to special teachers, two names come quickly to mind, both of them from Oakwood.  First, Pastor Jim DuJack led daily chapels at Oakwood and was always friendly and understanding to all of his students.  He always takes time to listen and think through the best way to explain answers to his students so that they understand the content.  Second, Mr. Tom Lindsay was involved in nearly every area at Oakwood, including teaching classes such as photography and New York History.  Joel remembers Mr. Lindsay as being fun to be around and always friendly to his students.

Joel also remembers a special friend from his years at Oakwood, Josh Cho.  Josh joined Joel’s class in 6th grade after coming to the United States from Korea.  Joel remembers Josh as always being someone who listened and someone who was not a show off even though he was very smart.  Joel says that Josh was always at his side and one of those “thick and thin special people.”

In Mr. Lindsay’s media club, Josh and Joel would enjoy messing with the settings of the devices.  He also remembers one time that Josh dressed up in a Friar Tuck outfit, complete with the correct hair, large cross, and large Bible.  They posed for pictures together and made some special memories.

Japan is a special place to Joel.  Joel’s uncle Ben along with his wife Kumiko have served as missionaries in Japan faithfully for twelve years.  Joel appreciates the friendly spirit shown by the Japanese people, perhaps best demonstrated by Wa in the Japanese culture representing harmony.  Joel has learned that the Japanese people look for things that are useful.  They often will be eager to learn things about Jesus, even when they are reluctant to accept Him as their Savior.  Joel’s family have seen Japanese people accept Christ by coming to the States and attending church services here.  Joel remains open to going to Japan himself, if that is where God might lead him.

Joel is considering pursuing a business degree to help him support himself and also to help him get into some countries that may be closed to Christians with Bible degrees.  He enjoyed helping his uncle teach English in Japan, but is really looking for “the opening God gives me.”

The Bible story of Jesus washing the feet of His followers is an important one to Joel.  John 13:14-15 says, “If I then, your Lord and Master, have washed your feet; ye also ought to wash one another’s feet. For I have given you an example, that ye should do as I have done to you.”