“As the [deer] panteth after the water brooks, so panteth my soul after thee, O God.”

We all know the goofy way young people may act when they first “fall in love,” but it too often becomes easy to lose the true love we should have for our Creator God.

We should enjoy and treasure the presence of God.  In Psalm 27:4, King David wrote that he longed to “behold the beauty of the Lord.”  When two young people gaze into each other’s eyes, they are actually doing exactly what David longed to do.  He wanted to be near His God and enjoy the company together.  He longed to be united with Him.

We should also desire to be like God.  Just as two young people will start to enjoy each other’s hobbies and interests, we will start appreciating the things God finds important as we draw closer to Him.  As we read about His character in the Scriptures, we will naturally emulate Him in even greater ways.

We should next desire to do the things that God loves.  The same way a young lady who perhaps who has never enjoyed sports will desire to learn about football so that she can please her boyfriend, we should desire to spend our time the way God would desire us to spend that time.  1 John 5:3 tells us, “For this is the love of God that we keep His commandments.”

Lastly, just as two young lovers who have been separated from each other, we should long for our God.  The verse above compares that longing to a thirsty deer seeking and eventually finding the cool brook.  We should desire the presence of God just as deeply in our lives.  David writes in Psalm 63:1 that his “soul thirsteth for thee; my flesh longeth for thee.”  Do we feel that same yearning?

It is our prayer for each of our students that they fall deeply in love with the God who sent His Son to die for our sins and conquer that death three days later in victory.  This God who spoke the universe into existence with only His words wants us to love Him.  How deep is that love today?

One of our favorite days of the school year is almost here!  Next Friday, May 25, weather permitting, LCA will hold our annual field day.  This day is for all students, K3 through twelfth grade.  Students will have outdoor activities, fun, and snacks!

Our high school prayer groups will be running the activities for the younger students in the morning.  All of our students should have the opportunity to enjoy the two bounce houses we are bringing in as well!

Of course, if bad weather is in the immediate forecast, we will postpone the event until the following week (likely Wednesday, May 30).  Keep an eye on your email for more information on this fun day!

Please note a change to the end-of-year schedule for our K4 students.  Our special program for K4 students and their families will be held together with the K5 graduation program.

Our final day of Capcom School Banking will be Tuesday, June 5.  We appreciate Mrs. Roarke and Mrs. Hurley for their volunteering to make the program a success over the past school year!

On Friday evening, June 15, LCA will present our annual high school commencement.  All of our families are invited to attend; no tickets are necessary.  We are privileged to have two long-time students graduating this year.  Our special speaker for the evening will be LCA’s former administrator, Pastor Neil Shupp.  Please plan now to come out and show your support and encouragement for our graduates!

Parents of children in K3, K4, and K5 should note that Thursday, June 7, is the final day of school for those students.

At the end of the school year, we ask our families to complete an anonymous survey to help in our school improvement process.  Each family should have received an invitation by email.  Please consider investing the time in this survey to help us continue to carry out our mission of training young people for God’s service.  Please see Mr. Fry with any questions about the survey.

Latham Christian Academy is privileged to have two graduating seniors during the 2017 – 2018 school year.  Both members of the Class of 2018 have attended LCA for a long time, and they have become good friends during their time here.  We will be highlighting one of the seniors in an article published in our Knightline newsletter today and again in June.  We begin this week with senior Joshua Arthur. 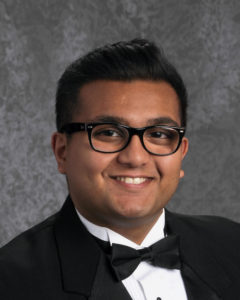 Joshua’s father, Reginald, was born in Karachi, Pakistan.  His parents were educators there, but came to the United States with the desire for a better life.  They moved from Pakistan to Troy when Reginald was 12.  Joshua’s grandmother’s sister had married an American and sponsored the family’s move.  Joshua’s father graduated from Troy High and went on to American Intercontinental University.  After working for several financial institutions, Reginald eventually settled in working for New York State, where he continues to be employed.

Joshua’s mother, Shana, was also born in Karachi, Pakistan where her mother was a nurse.  Shana and Reginald had known each other for many years through family connections.  They got married in Pakistan and then they moved back to Troy.  In 2000, Joshua was born, and in 2003, David joined the family.  After staying at home to raise Joshua and David, Shana went to work as a dialysis technician at Albany Medical Center.  Today, Shana is training to become a Registered Nurse.

The family moved to Albany in 2003, and Joshua started at LCA in Mrs. Urban’s K4 class the following year.  Josh is the last remaining LCA student taught by Mrs. Greaves in elementary school!  Josh also fondly remembers being notified of Mrs. Greaves’s daughter’s birth over the intercom while Mrs. Cole was serving as a substitute teacher for the first-grade class.

Joshua has remained at LCA ever since.  He remembers what appeared to him to be the fast pace of the secondary program when he entered seventh grade, a pace he says now feels very slow!  Through these years, he built friendships with two other guys—“The Big Three”!

Josh became friends with Matthew Heller (LCA Class of 2017) in third grade.  As Giants and Yankees fans, they bonded over sports.  Their friendship continued and grew through the years, especially when they began playing basketball together when Josh was in seventh grade.

Josh’s friendship with classmate Matthew Mansfield began a year or two later, even though they first met in kindergarten with Mrs. Mein.  Josh says they have always been together and that alone has cultivated a tight friendship, adding, “Thankfully we haven’t gotten sick of each other!”  Matthew’s older brother, Sam, is like an older brother as well.

Josh also remembered that, as an elementary student, he always wanted to be close to Mrs. Kettlewood, but it never happened until his junior year.  Josh said, “Suddenly while I was a junior, she liked me!”  Now they enjoy trading nearly daily barbs over Yankees vs. Red Sox!

Josh and his family attended a church in the area until it closed when Josh was in fifth grade.  The family then joined Latham Bible Baptist Church where they continue to attend today.  Pastor Walter has been their only pastor at this church.  Josh accepted Christ as Savior at a young age and has been involved in Vacation Bible School at LBBC.  Josh remembers that everyone he knows in his extended family is a Christian.  Josh’s middle name, Hugh, is shared with his dad and comes from a great-grandfather who served as a pastor in Pakistan.

This fall, Josh plans to study biology at the University at Albany to prepare for a career in the dental field, perhaps as an oral surgeon.  After the 2016 primary and general elections, Josh became interested in politics, and Josh reports that he may run for political office someday, noting, “America needs a bunch of young conservatives, and I would like to be one of them.”

Joshua’s life verse is Joshua 1:9, “Have not I commanded thee? Be strong and of a good courage; be not afraid, neither be thou dismayed: for the Lord thy God is with thee whithersoever thou goest.”