“Joash did that which was right in the sight of the Lord all the days of Jehoiada the priest.”

Judah’s King Joash is a remarkable character in Scriptures.  After his grandmother tried to have him killed, he survived, being protected by a priest named Jehoiada.  Joash became king at age 7 because he was the last remaining royal descendant.  Jehoiada reared him in the Temple, protecting him from further attacks.

Once Joash was old enough to take over fully as king, he saw to the destruction of idols and false gods in his country.  He is best remembered today for his efforts to repair and rebuild the Temple after years of attacks and disregard.  He was taught well and he served well for many years.

Once his mentor Jehoiada died however, King Joash changed dramatically.  He suddenly began to worship the idols he once had destroyed.  He refused to listen to warnings given by a prophet God sent to him.  King Joash even had Jehoiada’s son murdered for his efforts to call Joash to repentance.

This story of a promising start followed by a sad end should get the attention of every parent of a Christian school student.  We want our children to grow up loving and serving the one and true God.  What could cause someone like King Joash—or one of our own children—to change so dramatically?

It seems from Scripture that Joash was so busy serving the Lord that he never really got to know Him.  Oswald Chambers wrote in My Utmost for His Highest, “Beware of anything that competes with loyalty to Jesus Christ. . . .  The greatest competitor of devotion to Jesus is service for Him.”

We need to be sure our children are not simply being busy in service for the Lord, but that they are daily learning to love Him more.  Our children should indeed be involved in ministries in our local churches, and they certainly must be faithful in attending.  We parents must note carefully, however, that none of these things will guarantee that they will continue loving our Lord once they leave home.

Our primary purpose in life is not to do something for Christ but to know and love Him.  Let’s continue passing along our Christian heritage to the new generation!

Tomorrow, Friday, May 4, LCA will be hosting elementary students from other New York State Christian schools for our annual fine arts festival for students in grades 4 through 6.  This will be an exciting day of activity around the school.

Because of this event, there will be no school tomorrow for students in K3, K4, K5, Grades 1-3, or 7-11.  Please be sure to see your child’s teacher or our school office with any questions.

Students in Grades 4-6 should plan to be at school as directed by their teachers and will be dismissed around the regular time in the afternoon.  Parents of these students are also encouraged to attend the competition, if possible.

Our seniors had an action-packed week of fun, adventure, and rain at The Wilds Christian Camp and Conference Center last week.  Pictures and videos of the action are posted to our school’s Facebook page.

Each year, we travel to The Wilds as a time of retreat and fellowship for our seniors.  We are already looking forward to taking along the Class of 2019 next April! 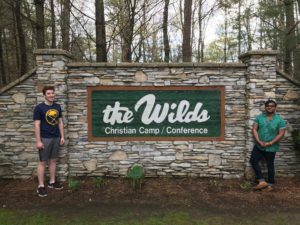 Next Thursday, May 10, our elementary students and secondary ensemble will present a special spring concert with many patriotic songs, sacred music, Bible quotations, poetry recitations, and even some instrumental music.

The students have been working on the music for this concert for several months.  Students in Grades 1-6 and secondary ensemble members should be at school by 6:30.

The concert will begin promptly at 7:00 PM in our church sanctuary.  We encourage all of our school families to be here with us.  We know you will enjoy the program!

Please note a change to the end-of-year schedule for our K4 students.  Our special program for K4 students and their families will be held together with the K5 graduation program.

A couple of months ago, we informed you that Congress recently passed a bill allowing tax advantaged withdrawals from 529 education plans for the purpose of elementary and secondary education.  At the time, the best information we had was that New York State would follow the federal law exactly.

We recently became aware that New York State has decided not to follow the federal lead in this specific area and will not allow withdrawals for education below the college level.

We apologize for any confusion on this matter.  We will continue to follow all available resources for complete information.  We also encourage you to ask your state legislators to allow families to use their own savings for private education at any level.

As many of our parents are aware, Pastor Walter has been running a carpetball tournament during lunch time over the past several weeks for those in grades three through twelve.  The tournament recently completed and we are excited to announce the winners!

Parents of children in K3, K4, and K5 should note that Thursday, June 7, is the final day of school for those students.